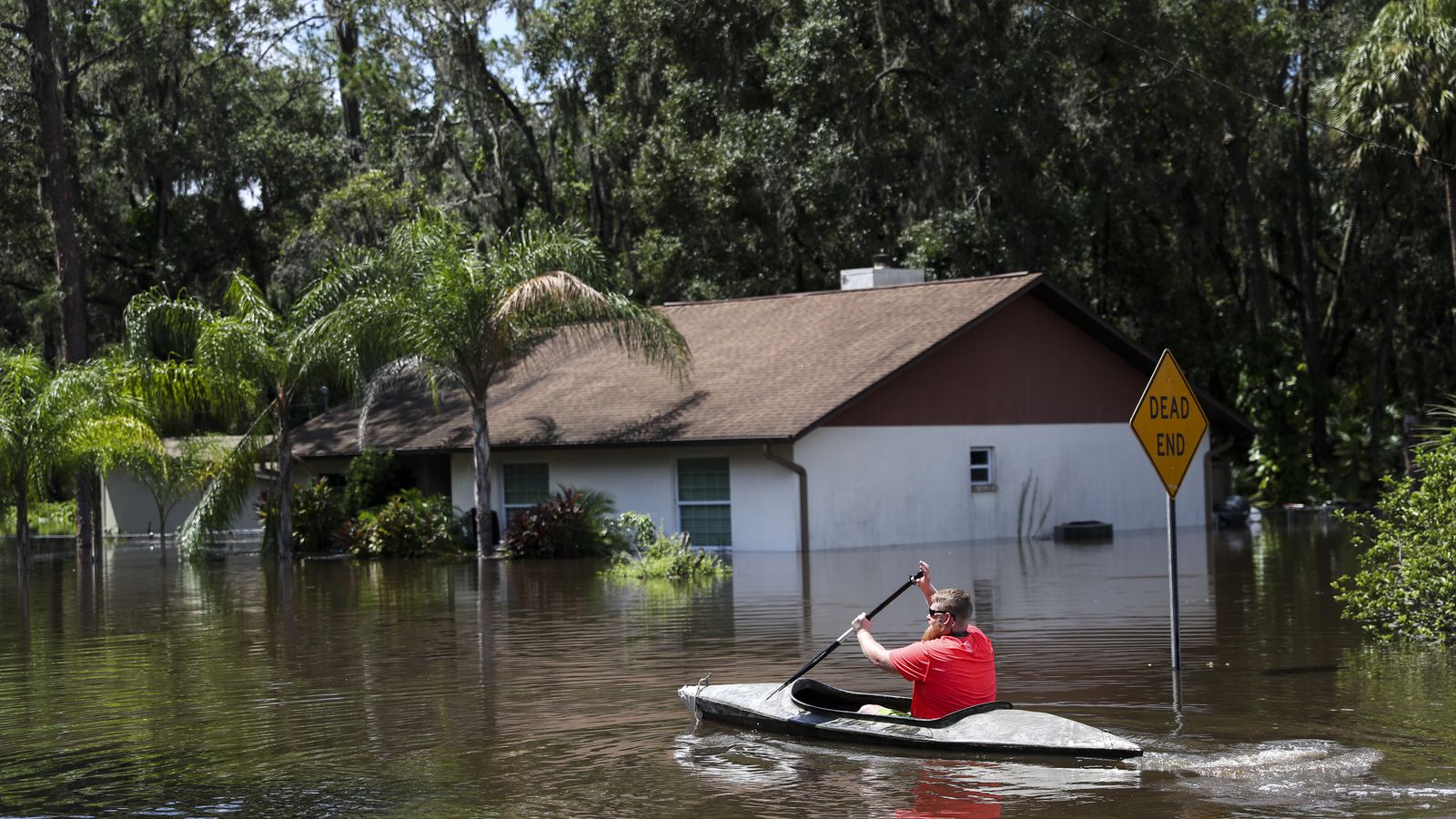 Florida has thousands more properties with high flood risk than FEMA says, according to new study

Tampa is the second-most exposed city in the state, the disaster modeling found.

About 114,000 more Florida properties are at risk of flooding in a 100-year storm than the Federal Emergency Management Agency currently estimates, according to a model released Monday by a nonprofit arguing the country has undersold its vulnerability to disasters.

Tampa is the second-most exposed city in the state, says the First Street Foundation, with 43,111 properties that could flood in such an event — the seventh most at-risk in the country. No. 1 in the United States is Cape Coral, according to the analysis, with more than 90,000 at-risk properties.

The foundation’s flood tool is meant to highlight gaps in federal insurance maps and give home buyers what First Street promises is a better view of vulnerability. The data include property-specific reports that are accessible online for users to search their address — and will soon also be displayed on realtor.com, one of the largest real estate listing websites in the country, the company said.

First Street’s effort joins a growing body of research that tries to estimate how Florida’s already substantial flood risk could swell with sea-level rise. By 2050, the foundation predicts, one in three Pinellas County properties could be in a 100-year flood zone.

Matthew Eby, founder and executive director of Brooklyn-based First Street, said the aim is a “democratization” of data.

“It’ll finally allow homeowners, home buyers and renters to understand their risk and how it’ll change over time, so they can best protect what for a majority of Americans is their most valuable asset,” he said. The modeling was developed by dozens of hydrologists, researchers and data scientists from technology firms and universities.

The 100-year floodplain is where lenders often require mortgage-holders to carry flood insurance. It’s a measure of probability, meaning each year there is at least a 1-in-100 chance of such an event happening. Over the course of a 30-year mortgage, that amounts to a roughly 1-in-4 chance of at least one flood.

Flaws in FEMA’s program are well-documented. In 2017 the Department of Homeland Security’s inspector general criticized insufficient oversight and slow updates for maps. In many counties, critics say, the models are more than five years old, covering past risks that fail to match updated science and conditions. The agency does not consider future sea-level rise in its maps.

The inspector general warned that “without accurate floodplain identification and mapping processes, management, and oversight, FEMA cannot provide members of the public with a reliable rendering of their true flood vulnerability.”

A FEMA spokesperson said the agency has not evaluated First Street’s tool but added it could give homeowners another source to consult when deciding whether to buy insurance.

“FEMA is constantly working to improve the production of the Flood Insurance Rate Maps within the context of changing conditions,” David Maurstad, deputy associate administrator for insurance and mitigation, said in a statement. A reworking of the risk rating system was set to be unveiled this year but has been delayed until October 2021.

Several Tampa Bay area officials said they had not seen First Street’s model before its release Monday, and they were reluctant to comment on specifics without knowing more about the methodology or taking a comprehensive look at the data. But the broad findings align with what scientists and resilience planners here have described in the past couple of years as the region’s potential future.

“There are ways to mitigate against these threats,” said Pinellas County Commissioner Janet Long, who also chairs the Tampa Bay Regional Resiliency Coalition. “The problem is getting our citizens to get their heads out of the sand and recognize the reality of where we live, and that there’s a cost for living in this paradise.”

“FEMA maps should not be the sole source people rely on for assessing their risk – 40 perent of the buildings flooded in Houston during Hurricane Harvey were outside FEMA flood boundaries,” he wrote in a statement. “If you live in Tampa, you should consider flood insurance.”

Remer added that the city is focused on using more renewable energy to reduce man-made climate change while also hardening or raising its infrastructure for the future.

The First Street data could help with a state effort to conduct vulnerability assessments across the Florida coastline, said Dee Ann Miller, a spokeswoman for the Department of Environmental Protection. Gov. Ron DeSantis, she said, created an Office of Resilience and Coastal Protection that is supposed “to prepare Florida’s coastline for the effects of climate change, especially rising sea levels.” Miller said administration officials will evaluate the model and whether it is useful.

Part of the novelty of the First Street approach is how it zooms to specific properties, but that level of clarity is challenged by uncertain science about precisely how much the climate will change.

“Honestly trying to project, based on the science, what hurricanes are going to look like 100 years from now or 50 years from now … we don’t know that,” said Gary Mitchum, an associate dean at the University of South Florida College of Marine Science. Some research suggests the tropics could see fewer but more intense storms, or slower-moving systems with more rain. Sea levels will rise, he said, but the exact amount depends on emissions trends and how people respond.

“It’s pushing the science hard and impacting people’s lives where we have to be careful,” he said.

Mitchum, who served on the Tampa Bay Climate Science Advisory Panel helping set local sea-level rise projections, said he was wary of how confident anyone could be in shifts of just a few percentage points or a couple thousand properties. “The FEMA method of doing this might not be perfect, but it is well-vetted,” he said.

First Street analysts said they used low and high bounds of an internationally recognized, moderate sea-level rise projection. They relied on simulations of somewhat more intense but not significantly more frequent future storms. For 100-year floods, they considered properties that could see one centimeter of water; the analysis does not factor in whether a building is elevated.

Mike Twitty, the Pinellas property appraiser who also chairs the state appraiser association’s flood impact committee, said he’s well aware of mis-mapping by FEMA in some areas but is cautious about the impact of dire reports.

“You have to remember why so many people come to Florida to begin with: People love the water lifestyle and want to live near it,” he said. “My concern is when some studies put too much emphasis on gloom and doom sea-level rise scenarios, which could lead to an effect on values far before the water begins to rise an inch.”

Lower property values could mean a lower tax base. 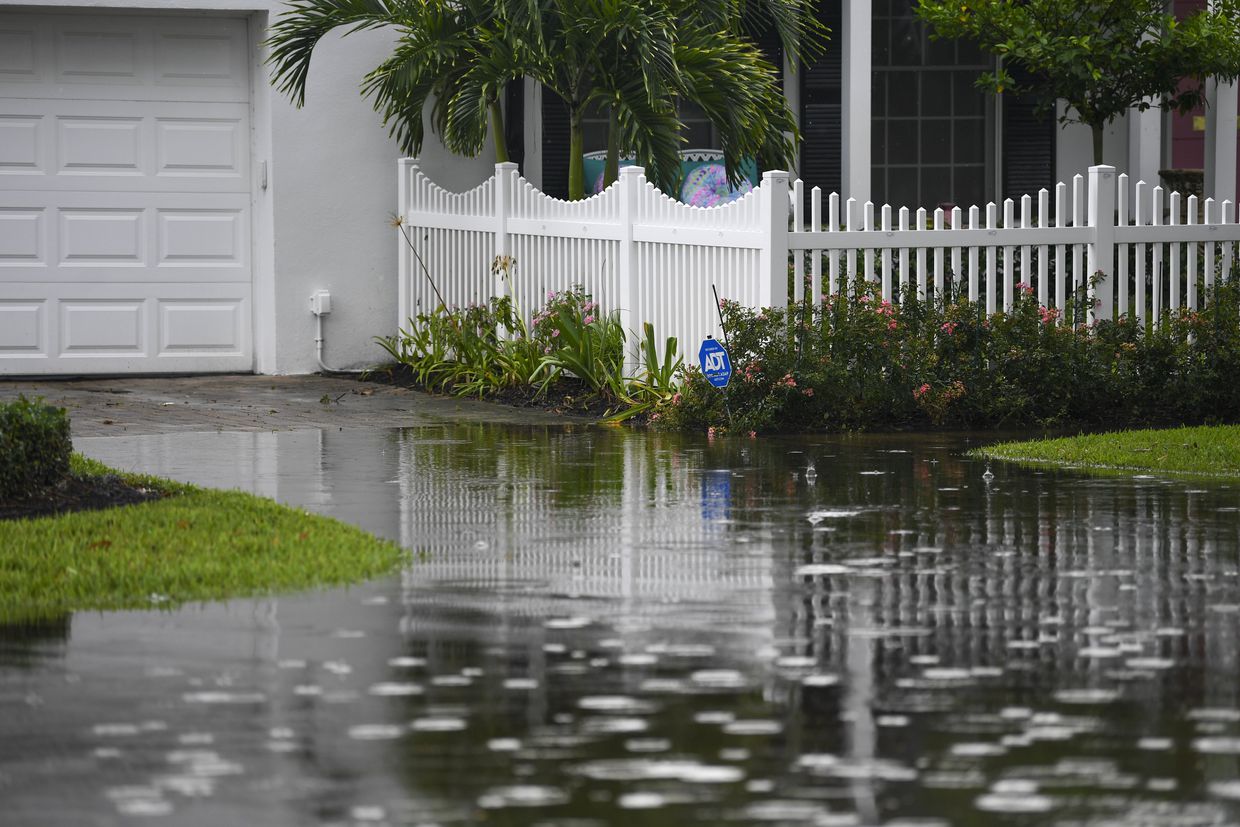 “They’re still projections. We don’t know exactly what they’re going to be, but application of smart science is welcome,” he said.

Twitty is considering submitting bill language to lawmakers to better allow homeowners to shore up their properties against flooding without major tax repercussions for new construction.

Realtor.com chief economist Danielle Hale pushed back on the notion that providing the information could have a chilling effect on the market, pointing to a survey that she said found the majority of people aren’t deterred from buying a property just because it’s in a flood zone.

“That means they’ll also value improvements made against flood risk which … could be another way having this information available changes the overall risk profile of homes for the better,” she said.

Realtor.com had initially planned on launching the flood risk data on its site Monday, but a technical issue derailed those plans, according to spokeswoman Nicole Murphy. She said the company still hopes to have that information on each listing “soon.”

The data create a new resource especially for places like Florida, which unlike fellow Gulf states Texas, Louisiana and Mississippi, does not have a law requiring home sellers or real estate agents to disclose a property’s flood history to buyers. In addition to projecting future risk, First Street recreated 55 past storms to calculate the likelihood that a property had been previously flooded.

Florida case law dictates that real estate licensees and sellers should disclose “all known facts that materially affect the value” of the property, and the Florida Realtors Association has a form with several flooding questions, but answering is voluntary.

Eby, the head of First Street, points out that well-equipped investors and companies already have the resources to deeply research flood risk in a way regular consumers cannot.

One company that has its own technology to calculate risk is Neptune Flood Insurance, based in St. Petersburg. Neptune’s appeal to customers is built around the idea that its advanced techniques are better than FEMA, meaning they can offer — in some cases — lower prices than the National Flood Insurance Program, said CEO Trevor Burgess.

“FEMA maps don’t line up with science,” he said. “They’re often leading people into a false sense of security that if you’re not in a mandatory zone, you’re not at risk of flooding.”

The federal government’s inaccuracy moves in both directions, according to First Street’s assessment.

The concerns about measuring flood vulnerability are hardly unique to Florida. In fact, First Street found smaller gaps in FEMA’s maps here than in other states with small rivers or streams, which the foundation said are missed in some federal estimates. Nationally, First Street found nearly 6 million properties they said face flood risk in a 100-year storm that FEMA doesn’t include in their maps.

“There’s a lot of money spent on FEMA flood maps in Florida to make them high-resolution because there’s … so much (property) value,” Eby said.

The state is especially vulnerable to rising seas, according to First Street, ranking fourth in the country for the portion of its properties that could be added to the 100-year flood category between now and 2050. Overall, the foundation says, about 1 in 5 Florida properties are currently in the risky floodplain today, but 30 years from now, it’ll be nearly 1 in 4.

“That is shocking, but it makes sense when you think about sea-level rise,” Eby said. “Thirty years is not far down the line.”