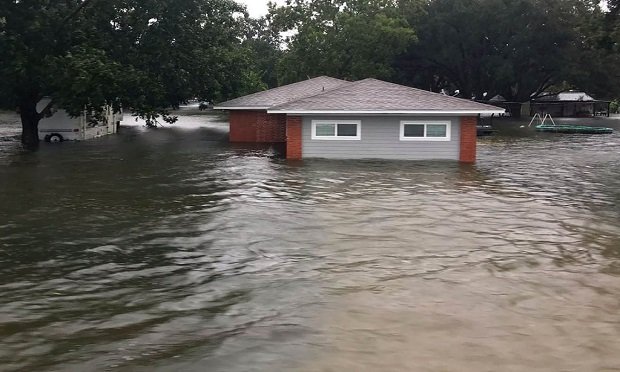 Facing off against flooding in 2020

There are 62 million homes in the United States with a moderate to extreme risk of flooding, according “Sizing the Personal Flood Insurance Market,” recent analysis published by Verisk Analytics, the insurance data analytics provider. The report echoed communications from the Federal Emergency Management Agency (FEMA), which houses the National Flood Insurance Program (NFIP). According to those agencies, flooding is the now the most frequent and expensive natural disaster in the U.S. What’s more, 90% of all natural disasters in the U.S. involve flooding, according to the National Association of Insurance Commissioners.

Despite all of that, the Insurance Information Institute (I.I.I.) says only about 15% of U.S. homeowners carry flood insurance. And some research indicates that percentage is much lower. ValuePenguin.com conducted a study in May 2019 that determined 9 out of 10 American families aren’t adequately insured against flood damage, and that just 7% of U.S. homeowners have a flood insurance policy, based on U.S. Census Bureau statistics.

“The need for flood insurance far exceeds the current take-up rate,” Marc Treacy, managing director of flood insurance at Verisk, said in an August 2019 statement about his team’s flood insurance market report. “Our study shows just how many homeowners are at significant risk for flooding and how big the opportunity is for insurers looking to find a new avenue for growth.”

Why are so few homeowners and businesses buying flood coverage? And what can agents, brokers and carriers do to make it more appealing?

Neptune Flood Chairman Jim Albert says the reason for the vast flood insurance coverage gap is “misunderstanding of the product or just a real, difficult user experience that drives people away from it.” The misunderstanding stems from many homeowners believing that flood coverage is included in their standard homeowners’ insurance policies, which it isn’t. Consumers may also find it difficult to navigate the NFIP’s website or the vast amounts of often irrelevant information and statistics they must wade through to determine their coverage needs.

Others rely too heavily on the government’s floodplain research, which is not always current.

“Recent flooding events have challenged the long-held perception that flood insurance is only for those homes in FEMA high-hazard zones or along the coast,” says Verisk’s Marc Treacy. “The perspective on protecting against flood loss, for both insurers and homeowners, needs to shift toward this: If it rains where you live, you are at risk of flooding. And it’s critical to understand the level of risk for each property, so homeowners can obtain the coverage they need and insurers can underwrite policies with precision.”

The bottom line: The vast majority of U.S. residents and business owners failed to understand their flooding risk. It doesn’t help that FEMA’s 100-year flood maps cover territories inhabited by roughly 13 million people but nearly 41 million people are now estimated to live in locations with an elevated flood risk.

There also was a time when flooding was considered an acute risk in only a few states: Texas, Louisiana and Florida. But 2019 proved that flooding can happen virtually anywhere in the U.S. For instance, nearly 14 million people were affected by what The New York Times dubbed “The Great Flood of 2019.” That event features especially severe flooding in Midwestern U.S. states along the Missouri and Mississippi Rivers. According to The Weather Channel, 42 different locations recorded record-high water levels. At least a million acres of farmland were waterlogged during that event, but the U.S. Department of Agriculture has few resources to address catastrophes.

Elsewhere in 2019, Hurricane Dorian spurred flooding in the Carolinas after devastating the Bahamas, and Tropical Storm Imelda became the fifth-wettest cyclone on record, spurring flooding throughout south Texas.

“Flooding has always been the most common and costliest type of natural disaster in the U.S., and I don’t see that changing anytime soon,” says Phil Wills, vice president of business development for Colonial Claims. He adds that flooding is likely to increase due to climate change and land development.

“Flood waters don’t care if you’re a homeowner, tenant, residential condominium owner or occupant, or a commercial business owner,” Wills says. “Flood waters don’t care where humans draw a line on a map that tries to identify the areas of highest flood risk (especially as our landscape is changing every day). Everyone should consider buying flood insurance. Homeowners, renters, houses of worship, school buildings, restaurants — everyone needs to seriously consider protecting themselves with a flood insurance policy.”

Some private-market flood insurance agencies lament the challenges to both carriers and consumers of working with the NFIP, a program created by Congress in 1968 to provide property owners with flood risk mitigation and insurance coverage, of which there was very little available then. The I.I.I. reports that as of September 2019, 59 insurance companies participated in the NFIP’s Write Your Own program, which allows insurers to issue policies and adjust flood claims on behalf of the federal government.

On the other end of the debate are insurance professionals such as Phil Wills with Colonia Claims, who believes the private flood insurance market and the NFIP enjoy a “very amicable, even a supportive relationship.” He says both camps are open to innovation and the product improvements that new data and modeling mechanisms are ushering into the flood market.

“The NFIP has the long, historical experience and the ability (Congressional mandate) to take on all risks,” Wills says. “For the most part, the Private flood marketplace is newer — using newer technologies to underwrite and manage the risks they wish to take on. I think both marketplaces are learning from each other and are trying to grow their respective books of business and protect more people and businesses from the risk of flooding.”

“The National Flood Insurance Program is unique in that the NFIP flood policy is considered an insurance product, but it’s better characterized as a government aid program with elements of insurance,” says Sullivan, president of Administrative Strategies, a business strategy and solutions company that’s involved in the insurance claims processing space. The NFIP has worked cooperatively with the broader insurance marketplace for years through its Write Your Own (WYO) program, which allows insurers to offer the NFIP policy through their own brand using their existing agents.

The single most significant characteristic of the NFIP is that it’s a government-run program, with all the power and baggage that comes with federal bureaucracy. Beyond the fact that Congress must periodically reauthorize the NFIP, which in itself can be arduous, a great deal of debate exists between lawmakers from different states regarding how well or poorly the program serves their constituents.

Wills concedes that the ongoing reauthorization drama is something lawmakers must address sooner than later. “Typically, the NFIP has been reauthorized for five years at a time. But lately it’s become common to reauthorize the program for only weeks or months at a time. When, as has happened occasionally, the program is not reauthorized timely, it creates a lapse when no new policies can be issued and no renewal bills can be sent. Every time there is a lapse in the program, it impacts mortgage closings, creates confusion for agents and homeowners, and requires significant IT and underwriting efforts for the NFIP and the carriers and vendors in the NFIP’s Write-Your-Own program,” he says.

The Trump administration announced plans in 2019 to reform the NFIP with a shift toward fully risk-based pricing.

“What we’re going to do is change an insurance-rating structure that hasn’t fundamentally been changed since the 1970s,” David Maurstad, FEMA’s deputy associate administrator for insurance and mitigation, told The Wall Street Journal. “We’re going to consider more flood risk than we currently do now.”

According to the I.I.I., FEMA said at that time that it would begin to assess properties individually, instead of calculating rates based on whether a home falls in a designated flood zone. This could drive more flood risk into private reinsurance and risk markets.

Any shift in FEMA’s flood rating approach will likely boost the already growing competitive landscape within the flood insurance market. Private market insurers increasingly offer flood protection now, and often at a more affordable price than NFIP policies. Other challenges facing the NFIP and its partners include ongoing political maneuvering.

“The rating mechanism used by the NFIP applies such a broad brush, that they take an area called the floodplain, which undulates, and they treat it like everybody within the floodplain is at the same elevation,” says Craig Poulton, president of Poulton Associates LLC, a managing general agent and wholesale insurance brokerage that is among the largest private-market purveyors of flood insurance. The NFIP considers its historical flood data to be proprietary information and declines to make that information public. Poulton believes the result is an overly bureaucratic system that is “anti-consumer, anti-taxpayer and anti-flood insurance buyer.”

A spokesman for the NFIP was contacted for this story but did not reply by deadline.

It’s all about the data

He adds that discussing flood risk and policy options must become part of any insurance producer’s “normal interface” with existing and potential clients, regardless of how impacted the surrounding community might be by floodplain mapping. “Frankly,” Poulton says, “it can flood anywhere.”

The good news is that catastrophic modeling tools have improved dramatically in recent years, says Sullivan.

“Location is the major factor in determining flood risk, but additional considerations can be key,” she adds. “Factors such as homeowner efforts to mitigate risk through the use of different building materials, detection devices and other methods. FEMA is taking all of these factors into consideration as they look toward developing improvements.”

“The most successful agents and companies that sell flood insurance are those that truly understand and focus on developing their expertise in the product,” says Sullivan, who is not directly involved with policy sales (as a claims servicing firm) but interacts with client-facing agents and brokers.

“Agents that see flood as just an add-on product or sell it because their customer tells them, ‘My lender says I need it,’ generally don’t find real success in growing their flood policy base,” she says. “With a single peril policy like flood insurance, the consumers need to see the value, and agents that are not experts find it difficult to explain all the benefits and protection that flood insurance offers.”

“What we have is an opportunity to help solve a tough problem,” says the chairman of Neptune Flood, which is in the process of patenting its flood-risk data analysis program, the Triton Rating Engine. “We can bring technology to (consumers). We can make it easier to understand. We can make it easy to design, and then we can provide coverages that are cheaper and more expansive than the National Flood Insurance Program. We think that will bring a significant new element to the market that will hopefully help solve this coverage gap.”

Besides the ongoing political push and pull that will continue to impact the flood insurance market, two trends are likely to become even more pronounced in flood as well as the broader P&C insurance industry in 2020: the ongoing digitization of insurance customer experiences, and the entrance into the market of fresh brands and players — particularly those that are rising to the expectations of today’s digitally savvy consumers.

“The industry is focused on improving the complete policyholder experience — from rating/quoting to paying claims — and implementing solutions that help make every transaction and client interaction easy and accurate,” Wills concludes. “To a large degree, this customer experience is what differentiates the various competitors and can directly impact a company’s brand reputation. I have no doubt that focus on the customer experience will continue through 2020 and beyond.”